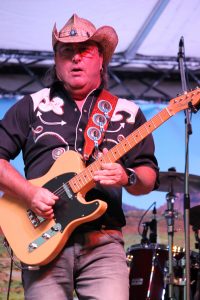 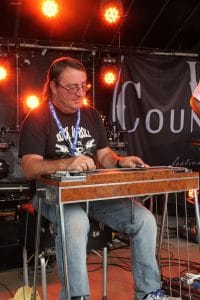 Born in Paris in 1956, the latest in a family of six children, I quickly bathed in the French and American music.

By age 12, I am a classical guitar training. Then I go through the rock scene including Paris where I record my first 45 Tours with a named «38 Tonnes»  in the 80s.

Arrived in the Southwest, I joined a group of Blues Rock (Chicano Blues) with which I played for 6 years and recorded an album.

Desiring to expand my musical horizons, I learned the 5 string banjo and played with Western Bluegrass Barbecue group. It was during this period that I began to get interested in the Pedal Steel Guitar. My meeting with Jean-Yves Lozach allowed me to deepen my knowledge on this instrument and technique.

Late 90’s, I founded with a friend a country band “Appaloosa,” in which I play this instrument. In ten years we will produce in many festivals including the biggest: Mirande, Berck sur Mer, Cagnes sur mer, West Country … in France as well as Switzerland, Belgium, Spain, Canada …